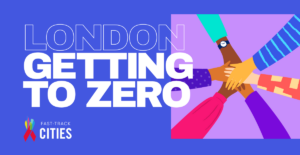 What is Fast-Track Cities?

Fast-Track Cities is an international initiative to end new cases of HIV by 2030. Over 200 cities across the world are part of this movement to get to zero new cases of HIV, zero preventable deaths, zero stigma and discrimination and a better quality of life for people living with HIV.

In January 2018, The Mayor of London, Sadiq Khan, signed the Paris Declaration on Fast-Track Cities Ending the AIDS Epidemic, along with London Councils, Public Health England and NHS England.

An introduction to Fast Track Cities

London has already made great strides towards achieving the United Nations (UN) targets for the Fast-Track Cities initiative. In 2016, for the first time in London, all the UN’s 90:90:90 targets were met. London is only the third city to achieve this target so far – joining Amsterdam and Melbourne. We have now reached:

Why is this initiative important?

HIV remains an important problem in London, with the infection impacting on Londoners more than any other part of the UK.

In 2020, there were 955 new cases of HIV, with an estimated 35,966 people living with HIV in London – almost 40 per cent of all those in the UK. Of these new cases, 349 of new diagnoses were reported among gay and bisexual and other men who have sex with men, 324 cases were among men and women who reported heterosexual sex as their probable route of infection, 14 cases were among people who inject drugs, 257 cases were among people with an undetermined exposure group and the remaining 11 were through pregnancy.

Recently, London has seen a significant fall in people newly diagnosed HIV positive, particularly in men who have sex with men. However, this fall is neither uniform across all population groups nor in all areas of the city, and rates of late diagnosis, although showing improvement, remain stubbornly high at 35 per cent. Late diagnosis significantly impacts people who are who are disproportionately affected by HIV like African, Afro-Caribbean and migrant women, trans women, gay men living with HIV who are also migrant men, men of colour and men who don’t have English as a first language.

What are the challenges?

For many Londoners HIV remains a stigmatising condition that negatively impacts on quality of life. Late and undiagnosed infection rates in London remain unacceptably high (34 per cent and 10 per cent respectively) and with considerable geographical variability across the city. Prevalence varies by ethnicity and by place of residence, with disproportionately high rates among black and ethnic minority (BAME) communities in poorer areas of the city.

What is involved in the initiative?

The Mayor and representatives from NHS England, UK Health Security Agency and Office for Health Improvement and Disparities (formerly Public Health England) and London Councils, have committed to work with partners to:

London also has a Fast-Track Cities dashboard through which all cities report their progress against the initiative’s targets as well as locally set objectives and goals.

The Mayor has made tackling the stigma attached to living with HIV a key priority in his Health Inequalities Strategy. Not only is it important to ensure those living with HIV can live their lives without discrimination, but the fear of stigma can be a barrier to early diagnosis, which in turn negatively impacts the quality of life of those living with the condition.

Signing up to the Fast-Track Cities initiative will bring together all those already working to tackle HIV across the capital. More joint working will help to ensure that communities affected by HIV can access the prevention, testing, treatment and support they need.