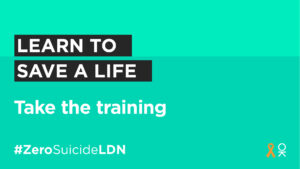 Since then, more than a quarter of a million people across the capital have completed the training as part of the #ZeroSuicideLDN campaign.

Developed by the Zero Suicide Alliance, the free, online training takes around 20 minutes to complete and is designed to show how to have a direct and honest conversation about suicide and mental health with friends and family.

The training also helps to break the stigma of talking about mental health, suicidal thoughts and bereavement. The approach follows research that shows talking honestly and openly about suicide has helped to save lives.

The #ZeroSuicideLDN campaign is managed by Thrive LDN, the regional lead for suicide prevention, and supported by the NHS in London. Campaign organisers have said that the impressive number of people taking the training each month reflects the ‘continuing groundswell and appetite’ amongst Londoners to play their part in looking out for other Londoners.

The success of the campaign is also being attributed to the collective support given to it by London partners including London Councils, London’s police forces, Transport for London, and other emergency services, such as London Fire Brigade and the Maritime and Coastguard Agency, alongside voluntary and community groups and many others.

As part of London’s recovery, the city’s health and care partners are now challenging the campaign to go even further.

To mark World Suicide Prevention Day 2021, on Friday, 10 September 2021, a new campaign goal of reaching half a million (500,000) Londoners to complete the Zero Suicide Alliance’s free online suicide prevention training has been set, so they can help play their part in saving lives. This would double the number of people in London who are better prepared to spot the signs and let those who may be struggling know they are not alone.

Over the coming months, the refreshed campaign will see a greater focus on Londoners supporting young people across the capital, including universities and education settings, plus aspirations of working with London’s night-time economy.

The Mayor of London, Sadiq Khan, said: “I am proud that a quarter of a million Londoners, myself included, have accessed suicide prevention training through the #ZeroSuicideLDN campaign and would urge all Londoners to consider doing so.

“Suicide is a tragedy but we can all have a role to play in helping to preventing it by supporting others and breaking the stigma around talking about mental health.

“I’m determined to make London a healthier, fairer city, and will continue to work with health and care leaders to ensure the mental health of Londoners remains a priority now and in the future.”

Martin Machray RN, Lead on Mental Health as Executive Director of Performance for the NHS in London said: “A quarter of a million people across the capital now have the skills and confidence needed to better identify suicidal thoughts and behaviour. This is such positive news for London, particularly as we begin to work towards our recovery from the pandemic.

“It is only through a collective effort in London that we have encouraged so many Londoners to take the online suicide prevention training. The NHS in London fully supports the #ZeroSuicideLDN campaign to go even further, encouraging even more Londoners to take the training and support people to seek help when it is needed. With all of London working together, we can look out for one another, spot the signs and be prepared to save a life.”

Dr Jacqui Dyer MBE, mental health equalities advisor for NHS England and co-lead of Thrive LDN, said: “Through the #ZeroSuicideLDN campaign, we have helped more than a quarter of a million Londoners know that there is nothing to be feared in talking about suicide and mental health. By doing so, we are working towards a city that is stigma free, where people can have a more direct and honest conversation about suicide with fellow Londoners in a safe and sensitive way.

“World Suicide Prevention Day is an opportunity to remember that it has never been more important for each of us to think and talk more about mental health and wellbeing. Especially considering the challenges so many Londoners have faced because of the pandemic.

“Together, by encouraging even more Londoners to take the Zero Suicide Alliance’s free online training, we can support people to talk openly about suicide and suicide bereavement.”

Dr Phil Moore, co-chair of the Thrive LDN Suicide Prevention Group and chair of the NHSCC Mental Health Commissioners Network, said: “We need to continue to be innovative in our approach to suicide prevention in London. The Covid crisis means the challenges are even greater, and it is only through continued efforts to support whole communities to come together and address the causes of poor mental health that we can meet our shared aspiration of making the capital a ‘zero suicide’ city. By thinking and talking more about our mental health, we can break the stigma surrounding suicide and mental health.”

Dr Geraldine Strathdee, co-founder of Zero Suicide Alliance, said: “The alliance is ultimately concerned with improving support for people contemplating suicide by raising awareness of and promoting free suicide prevention training which is accessible to all. Everyone, everywhere, in every part of our communities can take action.

“I’m delighted the alliance’s partnership with the Mayor of London and Thrive LDN has meant that so many Londoners have learnt how to best spot the signs that any of our friends, colleagues or loved ones may be in crisis, and now have the skills and confidence to support them seek help.”

To find out more about these resources and the suicide prevention training, visit www.thriveldn.co.uk/zerosuicideldn.

In the last year, the ZSA has expanded the range of resources of practical innovations taking place in local communities and services to reduce the underlying causes that can trigger suicide risks. The ZSA has done a special ‘crisis services deep dive analysis’ and are working with systems to implement crisis response improvements.

They will shortly launch a new initiative on supporting people at suicide risk and their families, carers and trusted network of supporters.

Thrive LDN is a citywide movement to improve the mental health and wellbeing of all Londoners. It is supported by the Mayor of London and led by the London Health Board, in partnership with Greater London Authority, Healthy London Partnership, NHS England (London Region), Public Health England (London Region) and London Councils. More information can be found at www.thriveldn.co.uk.

Thrive LDN is the regional lead for suicide prevention in London on behalf of NHS England. As part of that role, they facilitate the multi-agency Thrive LDN Suicide Prevention Group to deliver citywide projects to prevent suicide and support those affected by suicide.

The Thrive LDN Suicide Prevention Group has been meeting since Spring 2017. It is composed of a range of figures involved in suicide prevention across London. Projects are funded by NHS England and the Group meets on a bimonthly basis to help facilitate the delivery of these projects.

« Back to Thrive LDN