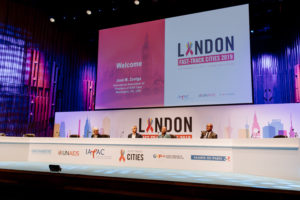 Last month London hosted the first international Fast-Track Cities HIV global summit. More than 700 people from 220 cities around the world came to London to share expertise on meeting the United Nations AIDS targets and ending HIV as a public health threat by 2030. It was a fantastic opportunity to showcase our great city and share all the work that has been achieved over many years, as well as to learn from the experiences of many others.

All of the presentations and abstracts can be read here.

During the conference, London joined the cities of Paris, Toronto and New Orleans, together with 100s of non-governmental organisations, to endorse the U=U (Undetectable = Untransmissible) global movement to help end the stigma around HIV. It’s vital to ending HIV stigma and improving the lives of people living with HIV that all Londoners know this clear and simple message – a person on effective treatment, with undetectable levels of HIV virus in their blood, cannot pass on HIV.

The Fast-Track Cities Leadership Group also launched the London Fast-Track Cities roadmap, which shows the steps London must take on the journey to zero HIV, particularly focusing on working together to deliver improvements and clear advocacy and leadership for the HIV sector.

London was also featured as part of a documentary about Fast-Track Cities around the world. Watch the whole documentary here. If you just want to see London watch from minute 23:26.

See pictures, videos and updates from the conference on our Twitter profile @LondonFTCI or on Facebook at Fast-Track Cities London.

Latest on this topic