Asthma and clean air: How does air pollution affect young people with asthma? 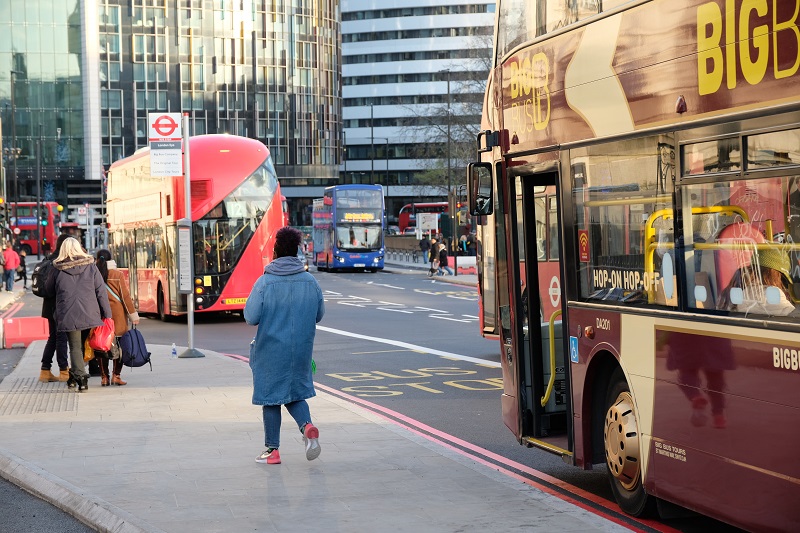 Colette Roach is a project manager in our primary care team. She recently completed a Master’s in Public Health during which she wrote her dissertation on the effects that air pollution in London has on the development and exacerbations of childhood asthma. We asked her a few questions about why London’s air quality is a concern, how it can affect a child’s health including asthma, and what is being done to tackle this problem.

How polluted is London’s air?

London hit the headlines at the start of 2018 for breaching legal air pollution limits. It prompted widespread concern about the effects London’s pollution levels could be having on the health of the people who live here.

When considering London’s current air pollution levels compared with other major cities globally, London actually compares quite favourably.  However, this is not to say that London’s air quality is nothing to worry about. Historically, the worst air pollution problems were seen in the 1950’s and 60’s during the great smog events. With the decline in coal-burning industry and heating, levels of certain pollutants have declined. Unfortunately London still faces problems with certain pollutants including nitrous oxides and particulate matter, partially due to high levels of diesel vehicle use in the capital.

Nitrous oxides (NOX) including nitrogen dioxide (NO2) – poisonous gases which can inflame the airway lining. Diesel vehicles are a significant contributory factor to NOX levels, especially in urban areas in which highest levels of NOX pollution can be found where levels of traffic are highest. In London a number of primary

Particulate matter, PM2.5 and PM10  – a  mixture of various particles, including carbon, nitrates, sulphates and other chemicals, suspended in the air. The size of these particles varies but those with the most significant health effects are the smallest, commonly referred to as PM2.5 and PM10. The numbers 2.5 and 10 relate to the size of the particles which are less than 2.5 and 10 microns respectively. The small size of these particles means that they are able to travel further into the lung in greater quantity with greater surface area contact, with ultrafines (less than 10 microns in diameter) able to travel across the membrane between the lung and blood vessels, entering the blood system. Again, diesel engines are a significant source of this type of pollution.

Ozone, O3  – a gas, made from other gases emitted from vehicles (such as nitrous oxides) reacting with sunlight. Levels of ozone tend to be higher outside of cities and towns.

Sulphur dioxide, SO2 – a gas resulting from burning fossil fuels including coal and oil, including through vehicle use. It also contributes to the formation of ozone.

Children are particularly vulnerable to the effects of air pollution as they are still growing and developing. In addition, children often spend more time outside compared with adults, for example in the playground during break times or when playing with their friends. Figure 1 shows primary schools across the capital which are in areas which breach EU limits for NO2. Figure 2 shows levels of PM2.5 across London. Every primary school in the capital is in an area which breaches World Health Organisation recommended levels for PM2.5. 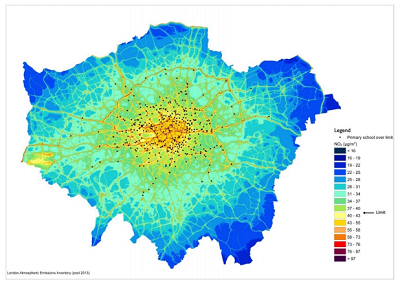 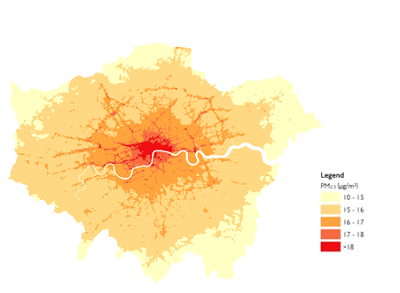 During my masters study I conducted a literature review to examine the evidence in the scientific literature linking different air pollutants with asthma in children. Globally, this is a well-studied field although there has been little research undertaken in the UK and London to date. A number of cohort studies have been undertaken whereby a group of children are followed over a number of years and their levels of exposure to different pollutants measured. This is to try to determine if differences in their health outcomes are due to differences in levels of exposure to pollutants.

The studies show that children with asthma who are exposed to higher levels of pollutants are more likely to have exacerbation of their asthma, or rather a worsening or increase in symptoms and this may result in hospital visits. There is also evidence, although it is weaker, that suggests children are at greater risk of developing newly-onset asthma if they are exposed to higher levels of all of the above pollutants.

What can be done?

Being aware of the signs and symptoms of asthma can assist with earlier diagnosis and enable children to have the right treatment and management at the right time and in the right place. Healthcare professionals, school staff, parents, carers, children and young people are encouraged to use our London Asthma Toolkit to ensure young people and children with asthma have the best care and experiences in London.

Reducing air pollution levels in the capital is also key. Action can be taken at an individual level, for example by using greener methods of transport, and as organisation; for example, Healthy London Partnership has produced a toolkit for NHS trusts to support them to reduce their impact on air pollution

Start applying the three asks of the London’s #AskAboutAsthma campaign. The campaign is held in week 38 of each year to coincide with children and young people returning to school and the highest peak of hospital admissions for asthma but its messages apply all year round. We’re encouraging all children and young people with asthma (and the people who care for them – family, friends and health professisonals – to get in the habit of asking these simple questions:

Visit the latest campaign week webpage to find out more about #AskAboutAsthma.